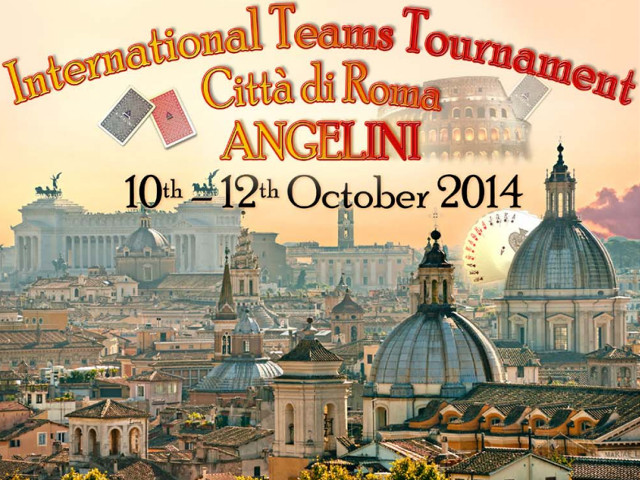 [accordion] [acc_item title=”General information”] The International Teams Tournament Città di Roma – Angelini will be held from Friday October 10 to Sunday October 12. Besides, a tournament for new players (Bridge students) will be held on Saturday October 11, starting at 3.00 pm.
The venue for both the tournaments is the Olympic Stadium – Authorities Tribune Monte Mario. The details are published below. For further information please contact the Italian Bridge Federation by e-mail: gare@federbridge.it [/acc_item]

The teams must be composed of maximum six players, plus a non-playing captain. Fancy names will not be allowed as team name of the participating teams.

Ten 8-board matches: nine of Swiss (non-recurring matches); the 10th and last match will be played as a pure Danish format, with pairing according to the ranking.

At the end of Phase 1:
– The eight top teams will play the quarterfinals, semi-finals and the final with 16-board KO matches. The 4 top ranked teams in Phase 1 will choose their opponents for the quarter-finals from between the fifth and eighth classified teams; the first qualified team will choose, then the second one, and so forth. The first classified will also choose one of the other three quarter-final matches for the pairing of the semi-final.

– The teams ranked from the ninth place on in Phase 1 will continue with two more matches of Swiss (total carry-over from Phase 1).

Only the teams not involved in the KO will play this phase.
The best 50% ranked teams at the end of Phase 2 will compose Group B, while the remaining teams will be divided in 8-teams groups according to the ranking. Integral Carry-Over for all groups.

On Sunday all of these groups will play three 8-boards matches of Swiss plus a fourth 8-board match with Danish format (pairing according to the ranking).
The KO matches will be played with preduplicated hands; they will be broadcast on BBO. There will be no Carry-Over.
Sunday in addition to the Semi-Finals and the Finals, the matches for the 3rd and 4th place will be played between the losers of the semifinals and for the 5th and 8th place, firstly among the losers of the matches A and D / B and C, and then between the respective winners and losers. In the event of a tie, a single board will be played both in open and closed room; in the event of a further tie, this will be repeated till the tie is broken.
Awards will be given to all the top eight teams.
In all the 8-teams Groups the VP of all the tournament will be cumulated, and in the event of a tie at the end of the last match on Sunday, Bucholz System on the last 4 matches will be used.
In Group B the fist 12 classified teams will be awarded, together with the special prizes (prizes are non-cumulative).
In all the other Groups at least the first classified team will be awarded, plus any unallocated non cumulative special prizes.
In all 8-board matches the VP scale 20/0 will be adopted, with 12 VP for a possible bye. The composition and number of the rounds of the various phases, and the possible increase of the awarded teams will be announced by the end of the first 4 matches based on the number of participating teams.

The Organizing Committee has the right to change schedules, format and money prizes according to any possible need, and according to the registered teams number.

Prize money will be paid net of tax [/acc_item] 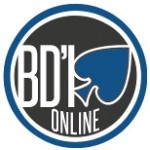 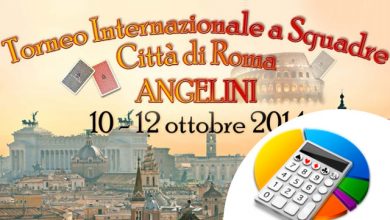